Police Arrests Bobi Wine Ahead Of His First Consultative Meeting, Due To Lack Of Enough Toilets For His Supporters.

Police Arrests Bobi Wine Ahead Of His First Consultative Meeting, Due To Lack Of Enough Toilets For His Supporters.

Police fired bullets and teargas to disperse supporters of Robert Kyagulanyi alias Bobi Wine, the Kyandondo East MP, and arrested him ahead of his first consultative meeting at Our Lady of Good Counsel in Gayaza in Wakiso district.

Bobi Wine was picked up together with Asuman Basalirwa, the Bugiri Municipality MP, Latif Ssebagala, the Kawempe North MP, Waiswa Mufumbira and the Kasangati LC III chairperson and are currently being held at Kasangati police station.

According to Basalirwa, they were driving in Kyagulanyi’s vehicle when police intercepted them at Kasangati and drove them to the police station. Kyagulanyi was expected to launch consultation meetings on his presidential ambitions today in his constituency. 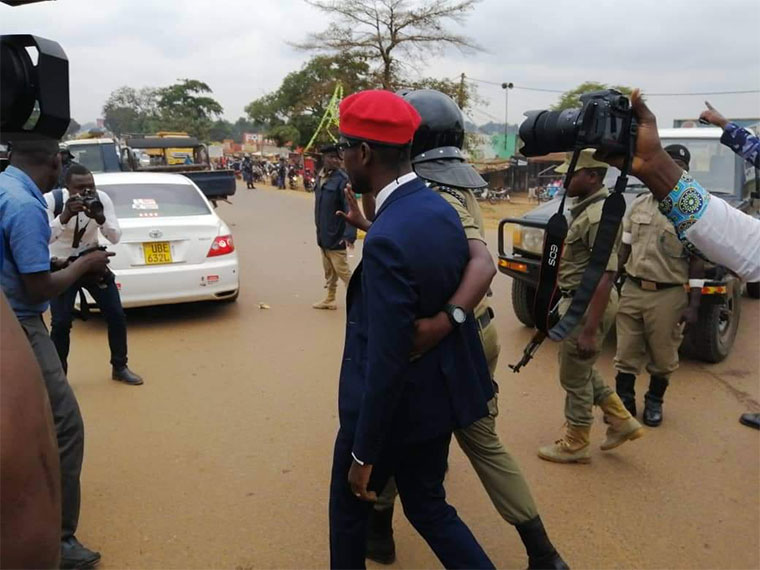 Police claims they had to block the meeting because it was scheduled to take place in an open space yet such meetings should be held in enclosed venues so as not to disrupt other people’s business. More so, police claimed that there weren’t enough toilets for the expected delegates.

The legislator wrote to Electoral Commission before Christmas indicating his plans to hold nationwide consultations about his presidential ambitions. Although he had notified the Electoral Commission, which gave him the green light, it is said that he had to meet other requirements as provided for in the Public Order Management Act. Bobi Wine has already declared his intentions to contest for the presidency against President Yoweri Museveni who has been in power since 1986.

The Kampala Metropolitan Police (KMP) spokesperson, Patrick Onyango told URN that they would issue a statement on the matter later.

Journalists who were covering the arrest of Bobi Wine were also arrested and others severely beaten. Among the arrested is NTV Uganda’s Arnold Sseremba alongside NBS TV’s Eddy Kisekka and Radio Simba’s Ssematimba Bwejiire. NTV’s driver Moses Egesa was hit by a teargas canister.

Last week, a hotel in Kitgum municipality in northern Uganda cancelled a reservation by the People Power movement to hold their consultation meeting there this week allegedly after being raided by security.

Sebastian Ogoni, the People Power regional Youth coordinator for northern Uganda says that they had planned to hold the meeting on Tuesday and had already made a down payment of Shs 100,000 of the Shs 900,000 that Jaflo Garden hotel had demanded for the one-day event.

Ogoni says they received calls from the hotel management on Friday, notifying them that security personnel had raided their premises and ordered them to cancel the booking. Solomon Onono, the manager Jaflo Gardens hotel confirmed that they turned down the booking for fear that their business may be affected by the activities of the People Power movement.

Onono confirmed receiving a downpayment from People Power but now says the hotel cannot host the anticipated 2,000 delegates because such numbers are beyond the capacity they can ably accommodate. Onono says that they are yet to refund the money.

“Our fear is that what they are coming for is politics and will affect our business. We have also consulted with police and they told us that the team haven’t approached them,” Onono said in an interview on Saturday.

William Komakech, the Kitgum resident district commissioner denied ordering management of the hotel not to host the meeting. He says, in any case, People Power only approached the hotel and failed to notify the security teams in the district as one of the prerequisites enshrined in the Public Order Management Act (POMA). As such he said, the planned meeting is unlawful.

An itinerary issued by Bobi Wine this afternoon indicates that he will start his consultations on Monday, January 6 at Our Lady of Good Counsel in Gayaza in Kyadondo East. On Tuesday he will move to Da Covenant hotel Grounds in Gulu, Grand Pacific hotel in Lira on Wednesday, Lavic Country Resort in Adjumani on Thursday, Praford New Vocational Institute in Yumbe on Friday, Heritage Courts hotel in Arua on Saturday and Dreamland motel in Zombo district on Sunday.