All Watoto Choir Members Discharged After Recovering From COVID-19.

All Watoto Choir Members Discharged After Recovering From COVID-19.

News coming in confirm that all members of the Watoto Children’s choir who had tested positive for COVID-19 have recovered after intensive care and treatment.

According to information from the church. 14 out of 22 members of the choir tested positive upon returning into the country from the United Kingdom.

Watoto Church Associate Team Leader Julius Rwotlonyo says that all 14, who included 11 children and three adults have now tested negative and have been discharged from hospital. Eight of the team members were discharged last week while the rest six were discharged yesterday.

An official statement dated April 23, Rwotlonyo informed Watoto Church members that all of them are now undergoing self-isolation. “The other eight members of this team who tested negative for the coronavirus are nearing the end of their period of self-isolation before they are reunited with their families,” the statement reads.

“We want to thank the government of Uganda and the Ministry of Health officials for their leadership and support during this time. We are also extremely grateful for the continued prayer, support and encouragement of friends, partners and members of Watoto in Uganda and around the world,” he said.

He called on Ugandans to all continue being vigilant in taking the necessary steps to combat the spread of the virus. God will carry us through this challenging period.

We would like to take this opportunity to celebrate God’s goodness regarding our children and adults on the Watoto Children’s Choirs who initially tested positive for the coronavirus, have all recovered and been discharged. Glory to God. http://www.watotochurch.com/covid19update23april.pdf … 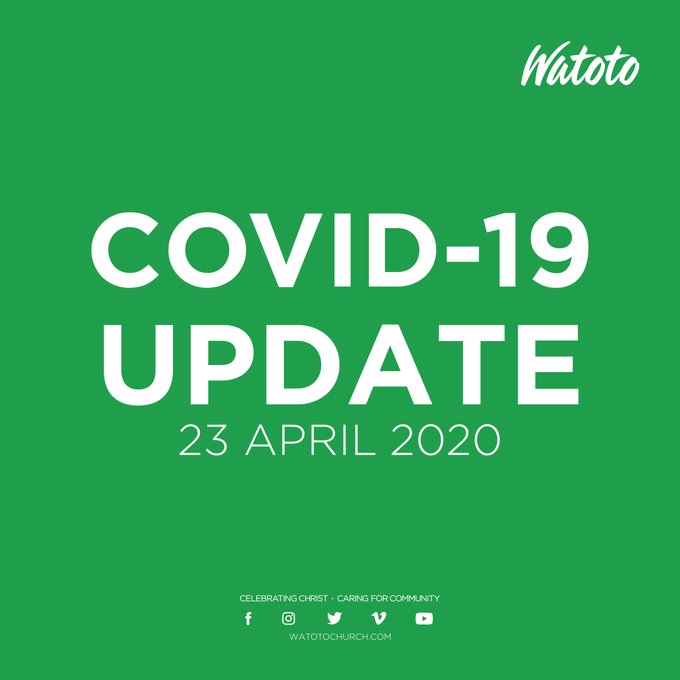