“Zahara Totto Lacks Class, Because She Wears Unattractive ‘Owino Mivumbas’ And Dances Like A Stripper.” Faridah Nakazibwe Roars As Zahara Totto Claps Back.

“Zahara Totto Lacks Class, Because She Wears Unattractive ‘Owino Mivumbas’ And Dances Like A Stripper.” Faridah Nakazibwe Roars As Zahara Totto Claps Back.

One of the victims of circumstance was NBS TV’s Zahara Totto who didn’t survive the wrath of NTV Uganda’s news anchor, Faridah Nakazibwe as she took her battle to the Entertainment Field Marshal’s wardrobe thereby cautioning her to be classy as a celebrity would be and stop wearing second hard clothes (mivumba) from Owino market.

According to the ‘NTV Ku Saawa Emu’ luganda news anchor, she was so disgusted to see that Zahara Totto’s looks in the TV mix battle were really substandard in relation to their own Lynda Ddane who like a Royal Princess, according to Nakazibwe.

This didn’t go well with re-known lugambo queen Zahara Totto who fired back live bullets at Faridah Nakazibwe for disrespecting her media hustle thereby advising her to stop social media idiocy and stop comparing her to amateurs and mediocre in the media fraternity, like Lynda Ddane.

“Let’s talk real numbers and not social media idiocy! I began from somewhere to be where I am right now (Being a FIELD MARSHAL ENTERTAINER ) stop disrespecting my hustle by comparing me to mediocres and amateurs who are still on there first step to a master piece like me hani! Not bragging but It’s the fact .ipsos shows they don’t reflect in the system . My brothers and sister it’s not bad talk but you still have along way to go . And good luck.“– Zahara Totto. 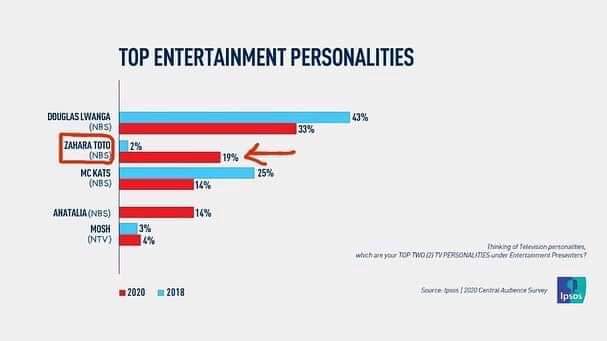 ON-AIR: The HotSports show is on hosted by @HisBryanness joined by @OkukuWafua and @TimothyRainford A roundup of the week’s top stories, plus a preview of the weekend ahead: Chelsea welcome Liverpool in the crunch tie!! All yo predictions and week’s highlights here. pic.twitter.com/ZVfR8IKKjC