Bobi Wine: Full Figure, Ashburg And Many Of My Friends Sold Me Out To Museveni For Peanuts.

Bobi Wine: Full Figure, Ashburg And Many Of My Friends Sold Me Out To Museveni For Peanuts.

Bobi Wine staged a Live music concert online through his Facebook page at One Love Beach Busaabala dubbed “Freedom Show” and during this concert he was talking about different thing Ugandans suffering are going through.

While performing his hit song ‘Specioza’, Bobi Wine hit hard at former People Power supporters Ashburg Katto and Full Figure exposing how they sold him out for very little money from NRM.

The concert that streamed for almost two hours left many Ugandans in shock and joy as Bobi Wine kept pointing out different people and naming them and what they have done to contribute towards oppressing Ugandans.

The self titled Ghetto Gladiator, Robert Kyagulanyi Ssentamu aka Bobi Wine staged his second Online Live Music concert at his One Love Beach in Busabala dubbed “Freedom”, that beat his first online concert in numbers. 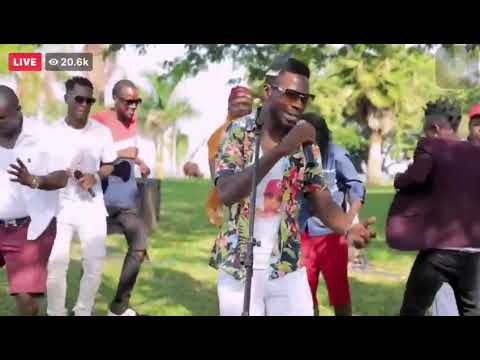 Opening up the cameras with Bobi Wine singing while seated on a Boat / Yatch with different musicians like Aziz Azion, Nubian Li, and his band members, he opens up with show with his famous song called Ebibuuzo Bingi naye Answer ntono.

The saxophone played by Joseph Sax opens up his performance while sailing on water before diving into other songs like; Situka Tutambule, Uganda song, Byekwaso, before they docked off at One Love Beach and got off the boat while still singing and performing.

When they landed, Bobi Wine kicked off an energetic performance with his masterpiece song called ‘For Better For Worse” and so many other songs with Aziz Azion, Joseph Sax and so many others.