“We Gave Your Prize Money To Your Father. Stop Ruining Our Reputation With Your Family Drama.” EAGT Organizers Speak Out.

“We Gave Your Prize Money To Your Father. Stop Ruining Our Reputation With Your Family Drama.” EAGT Organizers Speak Out.

East Africa’s Got Talent (EAGT) has finally opened up on first season winners, Esther and Ezekiel’s claim that they have never received their prize money of $50,000 (sh178m) they won in Nairobi, Kenya in 2019.

The franchise’s production coordinator Katson Horace says that they have actually paid $37,000 already to the winners’ father, Pr. Steven Mutesasira and are only left with $13,000 that they were ready to pay until the mother, Julie Mutesasira showed up demanding that she receives the money on behalf of the children. 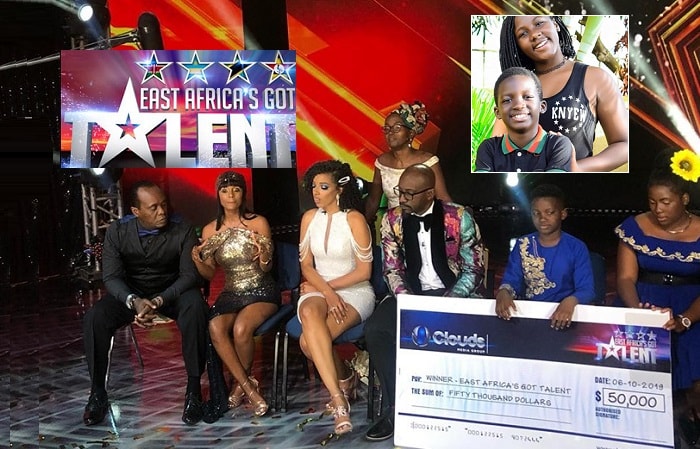 He expressed disappointment with Esther and Ezekiel saying he was shocked when they came out claiming they have not been paid anything, but he did not rush to the media to respond because they are the franchise ambassadors and so did not want to put their family conflicts in public.

He also argued that they are minors and at the time they won, Ezekiel was 10 while Esther was 14, being helped by their auntie. It was after they won that their mother and father got involved, complicating the whole exercise.

“Their auntie Gladys was the one helping them with everything. Their mother and father were not involved at that stage. We cannot just send $50,000 approximately Ugx.180,000,000 to minors. You know where there is money, everybody gets involved. What happens is the winners are paid half ($25,000) of the money immediately. But for them we did not know whether to pay the mother, the father or the auntie. But the father came into the picture out of nowhere, and we gave him the money” said a rather disappointed Katson.

“They are confusing for us and it is hard to come to the media and say they won, but family conflict. They are our ambassadors. When they claimed we never paid a penny, we still kept quiet. Now we are forced to say because there is a lot going on about us out there. We did not know whether to send the balance to Canada or to the father again, in Uganda. We also need accountability for the amount paid so we can deposit the balance,” Horace explained.

This week, BET award winner, Eddy Kenzo and comedienne, Anne Kansiime added their voice to the young singers’ plea accusing the organizers of dishonesty, demanding they pay up, before damaging the reputation of the Got Talent franchise.

Well, there you have it! Let’s wait for Esther and Ezekeil’s next revelation.