Andrew Mwenda Faces Backlash For Playfully Wearing UPDF Uniform In An Army Chopper, Yet He’s Not A Soldier.

Andrew Mwenda Faces Backlash For Playfully Wearing UPDF Uniform In An Army Chopper, Yet He’s Not A Soldier.

Motormouth journalist, Andrew Mwenda has come under fire, especially from social media commentators for donning a UPDF uniform despite not being a soldier.

In videos that have made rounds on social media, Mwenda was captured in a UPDF uniform as he sat in one of the country’s helicopters. 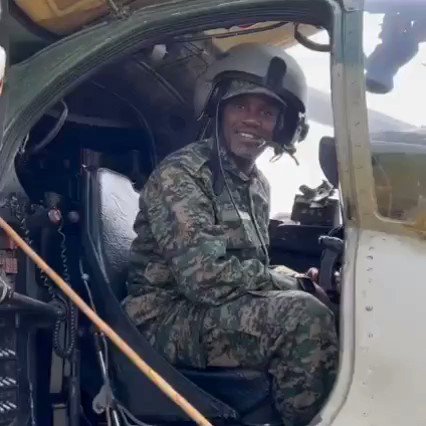 He was seen also seen greeting a number of UPDF soldiers including the chopper’s pilots as he donned the uniform.

The video has since caused debate on social media with many blaming the army for double standards.

“Here is Andrew Mwenda, posing in a military chopper putting on a full military uniform.  On the other hand, 100s NUP supporters are in jails, being tortured simply because the regime accused them of putting on red berets. This sickening abuse in our country will end someday,” opposition National Unity Platform party tweeted on Wednesday.

Many social media commentators insisted that had another person not close to the ruling government been captured in the same attire, the story would be different.

When contacted for a comment, the UPDF spokesperson, Brig Flavia Byekwaso said there are circumstances under which a civilian is allowed to put on a military uniform, adding the same could have happened during Mwenda’s case.

She explains that for one to be allowed, they must get permission from either the minister, CDF or a commander of an operation.

“Mwenda was moving with the commander of Operation Shuja(Maj Gen Kayanja Muhanga) where he was going. That makes me believe he was given authority to don that uniform and to that extent he didn’t break the law.”

Brig Byekwaso was however quick to note that what is not known is whether is true, Mwenda was given permission by the commander, adding that if he wasn’t, he committed an offence under the UPDF Act.

“If he didn’t have permission to put on the uniform, he committed an offence and if proven guilty is liable to not more than seven and not less than three years’ imprisonment.”