Once Uganda’s Biggest Female Rapper Keko Re-appears In A Sorry State, With A Rough Skin And Intoxicated Behavior.

Once Uganda’s Biggest Female Rapper Keko Re-appears In A Sorry State, With A Rough Skin And Intoxicated Behavior.

Once very popular for spitting out lyrical content and tearing through the male-dominated Ugandan hip-hop industry, Joycelyn Tracey Keko suddenly burnt out before somehow returning to the scene and again fading out.

Keko, Uganda’s first female writer in her right and a sensation for the hip-hop industry succumbed to the weight of failure in personal administration and sought pastures anew in Canada.

While she tried to hold onto the last straws of her lyrics when she featured with Ghana’s R2Bees for her song dubbed facelift early on in 2015, it was a little too late for embers were burning out, and with them her entire music career.

Two years later, in 2017 Keko re-surfaced only to declare that she was gay and had been granted a home in Toronto, Canada.

“My gay ass is free yes free and there will be a wedding you best believe. Thank you, Canada, for giving me a new home…I feel free like a new person it was a burden to live in a box and walk on eggshells,” she tweeted. 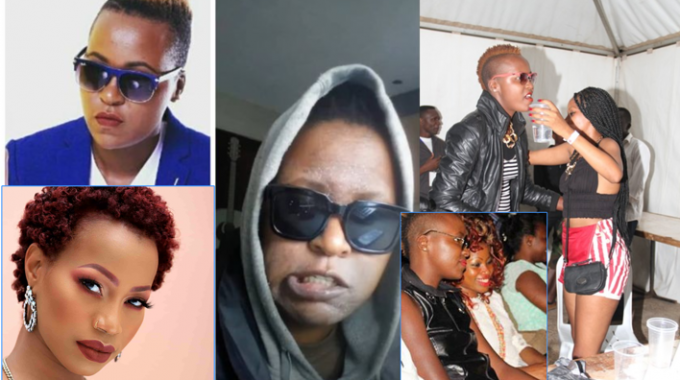 While many Ugandans believed that would be it from Keko, alas they were wrong. Yesterday evening, the “this is how we do it” singer turned up the lights in a strange video, puffing away on a joint and assembling all clans of alcohol while herself seemed completely far from the very scenes in the video, at least literally.

Blazed up she was, wasted she looked, inebriated and under the influence she proved, but that was not the worst, her skin was leaving her and everyone called it- She is not fine.

“That Ig video of keko i just watched literally just broke my heart. I loved her Art, love her personality, and wish her nothing but the best. #whatwentwrong? we fix it? Does she want it fixed though?” provocative Ugandan TV personality Tina Fierce tweeted.

“Keko live on Instagram is so heartbreaking. We need to have more candid conversations on life, drug abuse, and depression Loudly,” Next Radio’s Posha Aloyo said.

“Somebody needs to help KEKO!! If you go on Instagram and watch her LIVE video, you will stay away from drugs!!” Tweeted Sheilla Gashumba.